Fighting Hunger...One Can at a Time

County employees donated more than 6.5 tons of food and over $13,450 in cash to help put meals on the tables of less fortunate residents during the coming holiday season.

"Once again, our Alameda County employees have shown through generosity that they are truly committed to public service and making our community a better place," said Susan S. Muranishi, Alameda County Administrator. "When we mobilize our 9,600 employees, we really can make a difference." 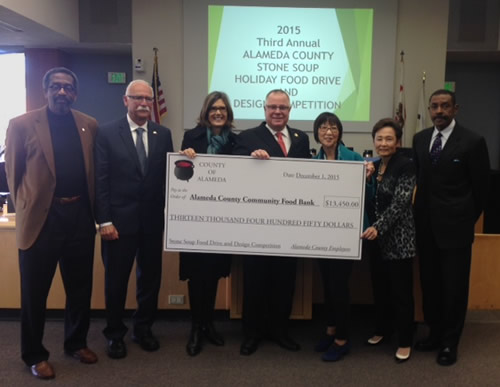 The 2015 Food Drive's success was achieved by creating friendly competition between the 13 County departments that participated in this year's food drive. Departments were urged to rise above their peers by raising the most donations and by showcasing their artistic know-how through the creation of compelling sculptures/art pieces using donated food cans, boxes and packages. The displays, which have adorned Alameda County public buildings over the past several weeks, all focus on the theme of hunger.

Using food items they created several imaginative displays, including: a "Starve Wars" tableau featuring a moving replica of R2D2 made from food cans; a “Picture a World Without Hunger" photo booth built from cereal boxes and soup cans (which invites passersby to take their own selfies); and several colorful constructions celebrating the Golden State Warriors 2015 NBA Championship and utilizing the team's "Strength in Numbers" slogan to underscore the teamwork needed to eliminate hunger in Alameda County.

A panel of five judges reviewed this year's entries. Winners in this year's Stone Soup competition were:

Also to be acknowledged are the awesome Partners who, while they did not build a display, contributed food and/or monies to the drive. Partners: District Attorney's Office, Health Care Services Agency, Public Defender.