I worked in retail for a major national chain for 23 years. They called it early retirement, but I was forced out. They told me I could take the deal or they would cut my hours. I’d already gone from full-time to 24 hours a week, and they were offering 15 hours at $12 an hour. You can’t live on that.

Someone in the company had come up with the idea that they could save a lot of money by moving all their employees from full-time to part-time: no benefits, no vacation. It went from a job for working people to employment for kids who lived at home with their parents. I didn’t want to take the deal, first of all because I’m not old enough and, second, because I feel like I’ve got a few good years left in me. But it was one of those things you can’t refuse, so I’ve been “retired” for about a year and a half.

Since my forced retirement, I’ve been relying on three safety net services to get by, in addition to a small pension: I have unemployment, which was both recently extended and cut—so I still get benefits, just not as much—and I get CalFresh (food stamps). I had to fight for both of those benefits because I was told I didn’t qualify. The third benefit I get is health care through Alameda County HealthPAC. I’m pretty much loving HealthPAC. I don’t like the wait, but it’s great when you get in to see someone. I mean I’m getting dental work done for no charge! Free x-rays, free prescriptions.

I don’t know what I would do without these benefits. The truth is that the unemployment and pension checks together don’t even pay my rent. Bay Area rent is so expensive and, to be honest, I’m in the process of being evicted right now. I have a court hearing, but that’s just delaying things while I try to find something I can afford. I pay $1,000 a month for a hole in the wall. Anything I can afford has a waiting list, so I’m looking to move out of the Bay Area. It will be hard leaving – I have family here.

Fifteen years ago, I was having trouble feeding my son because I’d lost some income, and I reached a kind soul at the food bank. I’d seen billboards that said call if you need help, but I thought that was for someone else. I learned there were other people like me and I wasn’t alone. I started out waiting in food lines with everyone else. Then I found out if you volunteer for three hours you get a bag of food as a thank you. That felt better to me, like I was doing something to earn the food.

I’m still helping out at the food bank and one thing I notice is how all the numbers are growing: numbers of food being distributed, numbers of volunteers, numbers of calls and referrals, numbers of new services being added to help with advocacy and education. So many people need services. In one way it makes me feel better that so many people need help now, like it’s not my fault, but in another way it’s so sad. More people are struggling than ever.

One thing that really gets me is politicians saying we’re saving the money for a rainy day. It’s raining now! I’m having problems today. Don’t I matter? I can’t wait for a month from now or a year from now. There are a lot of people who have no idea how they’re going to make it through today. 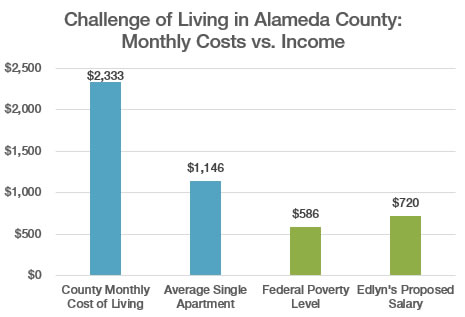 The chart shows the challenge of Edlyn living in Alameda County when the cost of an average single apartment is above the wages she was offered.
1 in 5 Alameda County residents needed food from a free food pantry last year.