My name is Barbara and I’d rather not tell you my last name. Telling my story feels pretty personal. I came from a poor-to-middle-class family that ended up splitting, so I mostly grew up in a single parent household. That’s when I was first introduced to social services, because my mother needed them, and it was extremely hard living on what was provided.

We were on aid all through junior high and high school, and my mom struggled to take care of three children in a studio apartment. But I later learned we were on aid a few times even before that. Me and my friends always assumed I was middle class because we had two parents and owned a home, but I learned from my mother that we’d been struggling for awhile.

So, when I found myself in a similar situation, pregnant and choosing to not marry the father, I did my best to try and make it turn out different. I signed up for Medi-Cal because I knew I needed it, but no one told me about any other available services. They knew my situation because of all the information you have to give them on the Medi-Cal form. I was working part-time and going to school, but none of the workers said “This could be a lot easier for you and let me tell you how.”

I’ve always tried to work, go to school, have my own place, and take care of myself and my child; but every time you make a penny more, your benefits drop and it’s hard to get ahead. The problem is anything close to minimum wage doesn’t cut it. With all the bills and the cost of transportation, it just doesn’t work. So you have to have a career and that means you have to get a degree. I’m focusing on health education and nutrition now.

I think that what the system most needs is people who really care. I’ve come across some that care and are doing the job to the best of their abilities, but they’re overworked with so many cases. It seems like we’re all just numbers.

We’ve been without food stamps for three months, just waiting. And I was just on the phone a little while ago talking to my social worker. She’s supposed to be off on Fridays,but she’s so swamped with new cases, she came in to catch up. I thought whoa, that’s great she did that, but when staff are so overwhelmed, people drop the ball. I think that’s caused by budget cuts.

The main thing I want people to understand about me is that I really want to be self-sufficient, and the system doesn’t make that easy. I want to be the one who learns how to fish so I can feed my family for a lifetime. 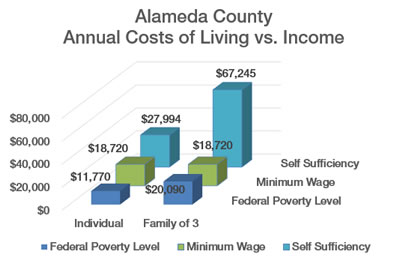 A full-time worker making minimum wage earns less than the Federal Poverty Level if they are supporting a family of three.
The average CalWORKs grant is less than 50% of the federal poverty level.