My life kind of took a turn in 2011 when I couldn’t afford my rent and found myself homeless. I was born and raised in Oakland, got married here, and raised five children. All of a sudden I was a homeless senior citizen.

I was fortunate to have a good friend who told me about St. Mary’s Senior Center. They have a program just for homeless seniors in the winter, and that’s where I went. They had an art class and a writing class, where I took up poetry again, and they had a caseworker who helped me fill out applications for affordable housing. That’s how I ended up here at Merritt Crossing—I won a lottery. St. Mary’s is a good place, but having to sleep on a cot, not being able to lie down when I wanted to, not being able to take a bath when I wanted to, all sorts of people there—it was an experience.

I love Merritt Crossing. I’ve been so touched by the dignity of this place. When people think of affordable housing, they assume it’s going to be rundown—but this place has so much quality. It’s quiet, I feel secure. We have a good community here. I feel great about it, blessed. I just wish there were more places like it.

I get some benefits now that help with my costs, but I couldn’t live in a beautiful place like this without help. When I hear about budgets, the first thing I think about is shelters and affordable housing, because I know how much they’re needed. It seems like the budget cuts always affect the poor and needy first, so I’m always concerned.

The experience of being homeless was really overwhelming, and I would say a life-changing experience. But, when I look back, I’m glad that it happened because I got the chance to meet people different from me. I was never rich, but I was used to having a house. Living in a shelter opened a door in me and made me more sensitive to other people’s situations. Now I know that anyone can become homeless.

When someone says they’re homeless, some people automatically think “What did this person do?” Or “Are they a dope addict, what happened?” Now after going through this, I have a whole different outlook. And people need to know that it can happen to them. Home is where the heart is and when you’re homeless your heart doesn’t have a home. When your heart doesn’t have a home, it’s hard to be happy. Being homeless, it just throws you off.

I’ve never seen so many homeless seniors. I think seniors used to be taken care of by their families, but now that doesn’t happen so much. When you’re a senior, that’s a time of life when you should be coasting in, taking it easier, not dealing with all these emotional things that come with being homeless. I think the idea of homeless seniors is relatively new in society, and now it’s like an epidemic. 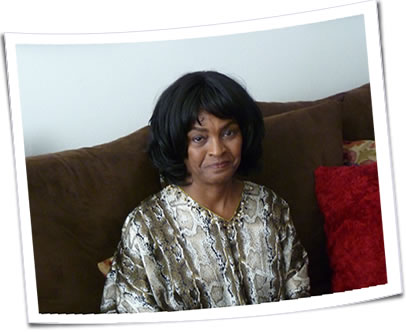 Signs of Our Time
A poem by Delaine Jones

A sign of the time,
a saying that is coined,
but oh how time and
change has come.

A cell phone in every hand
people hurrying along
sidewalks now are houses
where people live, where they sleep
out of garbage cans they eat.

People beautifully dressed to the nines,
when evening comes,
they have no home
where they can dine.

Children are no longer cherished
as our future,
they are denied all essential resources.
Human kindness no longer considered,
but Wall Street, the big guns
and money are the issue.