Schqueilla and I met in 2005, got married in 2010, and have three beautiful children. A few years ago, I started having what I thought was asthma problems. I tried to wait it out, but I was wheezing so bad, we had to call 911 and they took me to the hospital. The tests showed my kidney function was really low. They gave me some medication and put me on a strict diet. The thinking was that I would take the pills and eat well and it would go away. And that’s the way it was until January 2013.

I worked at CVS but my health got so bad, they put me on Family Medical Leave and then let me go. Schqueilla found a job at the post office, but I couldn’t really look for a job because while she was at work, I took care of the kids. With Schqueilla on a split shift, my schedule was hectic. I was always with two or three kids. Day care was way out of our budget. We applied for subsidized child care and we’ve been on a waiting list for more than two years.

I finally got a job at the post office, working the night shift, so I could be home during the day and Schqueilla would be there at night. Then, a week into my job, I got the asthma thing again, and I went back to the emergency room in the middle of the night. Schqueilla was home with the kids. I called her from the hospital and said “come down, I’ve got fluid in my lungs and it’s because my kidneys are failing. They’re taking me to ICU and putting me on a dialysis machine.” I went from chronic kidney disease to complete kidney failure, and everything changed.

While I was in ICU, Schqueilla was home taking care of the kids, but she couldn’t take much time off work—and still no child care. Some days, I don’t feel good, but the family needs me. I know I’ve got to deal with this problem like a man—take it like it is. We just wish life were a little easier. If we had child care, I could find a job so we wouldn’t have to live in that percentage. You know that percentage they put out there—low income—we don’t want to live like that, we don’t want to be a statistic. We want to show our kids that there’s more to life besides struggle. My mom struggled a lot - she worked two jobs with four kids. We want to show them a different way.

Even though I’m on dialysis, I can work. If we had day care, I could work in the morning and go to dialysis at night, and it would be so much easier for us. We want the kids to be in a teacher’s presence, to learn new things, to be around other kids. The first five years are very important in a child’s life and they haven’t had what they need.

Now with the budget cuts, it’s just harder. My wife hasn’t worked for a full year yet, so she doesn’t have medical insurance. All of our medical care is from the County. You can be on the phone for 40 minutes just trying to get a question answered. Even with that, I have to pay about $140 a month for my medicine. It’s a big impact. We get just enough to get by but not enough to get out of trouble.

We just learned our child care co-pay would be $1,600 a month. That’s crazy! We can’t afford that. Schqueilla was on CalWORKs back with our first born, but that’s a route we don’t want to go, we don’t want to go backwards. We want to work. We hate to ask, but when we need help, it shouldn’t be this hard. Child care would make living easier. I could get work, our children could have friends, and Schqueilla could wake up without worrying what’s going to happen today.

I just wish people would look into the eyes of people who are struggling. Life isn’t easy for us, and there are thousands of families like us - many worse. Every year brings another cut. Let’s try something new. People need to help each other out. When I see homeless people on the streets, I always give them money because they’re worse off than me. There’s always someone who has less than you—help them out. That would be sweet. 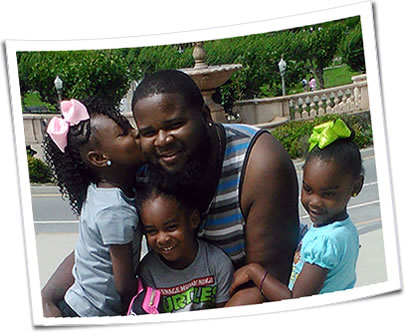